Buy this short story on Amazon

I can’t put a review of this book on Amazon because, as stated on the author’s ‘Acknowledgements’ page, I was a beta reader on this outing. So I can’t post an entirely unbiased review anywhere. But right here’s my site and I’ll do what the hell I like, so I can at least throw a little advertising out in the form of my thoughts…

The best part’s the cover!

Okay, I’m just kidding, but it is a seriously cool cover. I want to know who that designer is and how much they cost to hire!

I’ve read all M P Hick’s stories (the stuff that’s published, that is) and this one stands out because it’s more about the human emotion than it is about the violence and the conflict. Okay, Revolver was somewhat like that too, and so was Convergence, but rather than have the camera pan nation or worldwide this time, it feels like it’s the end of the world for one man, and it’s more about the internal world of his thoughts that are winding (perhaps) towards their own end anyway.

Everett Hart is a sad person, that much is evident from page one, yet he’s not the character who just lies down and waits when the zombie apocalypse kicks off either – he’s a lens for seeing the behaviour of others and a man who offers a different perspective than you’d usually find in the average zombie romp. As a sympathetic character he’s highly effective because his musings go to such human places: the mourning of his wife, the relationship with his absent father, the way it’s affected what he thinks of himself as a parent and grandparent. His story feels somewhat inevitable in its conclusion, yet perhaps that’s the whole idea: this story is less like a suspense one and more like an unusual mix of zombie action with *gasp* a little human-literature. You may not see the average ‘serious’ lit author doing the human condition through a zombie invasion, but this story made me wonder why not.

The writing style from the DRMR novels, Revolver, and Consumption isn’t here this time; Let Go has a slower pace despite what’s happening and a feeling that’s slightly more Stephen King than the transgressive style of some of M P Hick’s other stuff – the American diner setting with the main character celebrating his birthday alone with a meal did make me think a little of a late scene in Breaking Bad, not that there’s any real connection there, but the mood is quite similar. All that said, there’s the familiar poking at the absurdity of certain things in modern America that I’ve come to find very much a staple of this author’s fiction.

Okay, so I still say ‘Read Revolver if you read nothing else,’ but this diversification of style and content points to M P Hicks being an author who may well have a much more diverse skill set to offer us yet.

A quick afterthought: I’ve just finished reading The Doomsday Chronicles anthology, and if you’ve also checked that out and liked it, this story should be right up your alley. It would have fitted in well alongside all those. 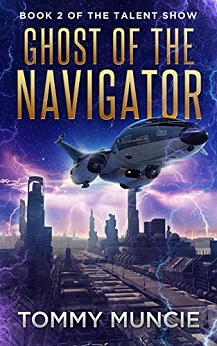