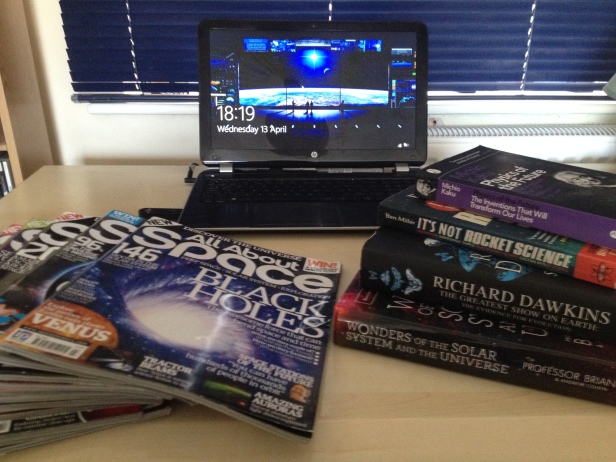 Back when I was into martial arts, I visited a dojo where the instructor was giving a class on the application of Newton’s laws to the motion of various kicks and punches. Would you think about that sort of stuff during a real fight on the street or in the ring? Of course not (the instructor did admit this), and it was a slightly odd lesson, but what I took from that class was the sentiment behind it. I can still hear this guy’s voice now, saying ‘If you don’t know about this, buy a fucking book; there’s nothing like an education.’ I could wax lyrical about this all day though, so let’s get to the point: this instructor didn’t have a science degree and neither do I; we were just two people who knew that there was science behind what we were doing, and it paid to know about it, whether it was for him improving the can of kick-ass he could unleash if his life depended on it, or me writing the kind of sci-fi that readers would love.

Among the most amusing attempts at insults I’ve seen in sci-fi reviews is a question I saw recently: ‘Do you suppose they [the author] suffered from home schooling?’ Thus followed a reply from another reader to the effect of ‘I’d pit my homeschooled kid against yours any day of the week.’ Why did this amuse me? Because it occurred to me that most of the research I’ve ever done for my books and stories was effectively me home-schooling myself as a grown-up. In a way, I’m pitting myself against authors who know far more about science than I do. Except I don’t think of it that way. They’re not the competition because (1) we might end up sharing readers rather than stealing them from each other, and (2) if I want to be a good writer, I have to take lessons from those who have already got to where I want to be (IE I’ll follow them on Twitter and occasionally send a ‘Hey, what’s your secret?’ message.)

Like many sci-fi authors, I seek to avoid comments to the tune of  ‘Author fails remedial science 101’ as much as I can. I may still make mistakes, or take liberties that would have hard-sf readers and professors shaking their heads, but at least I’m trying to minimise the collateral by being interested in, and researching, real science. I am genuinely interested in it. Far more interested than I was at school.

I dropped science at 16 in favour of English, drama and languages, because I wanted to put words on paper and pretend to be other people. Or both at once. I read German and Spanish at Sussex University, because talking to people in languages other than English gave me a thrill akin to writing fiction. I’ve started learning Japanese again recently, as if to really up that game. I’ve read Kafka and Marquez in their original languages, and written dissertations on them. But in the end, I’ve come back to the science side of learning because it all became more interesting for me when I had to put it into a context. My context is worlds that don’t exist yet, in times I will never live to see (although that’s always up for debate, but perhaps in another article…)

The thing I’ve found about science books and magazines is that they’re often not designed specifically for sci-fi writers (yes there are some I know of, but that’s for later.) Sometimes it was hard to find exactly what I needed, because what I needed had a context I had to plug it into, and that’s where I’d get stuck. Solution: consult someone who could answer questions. When I found out that someone I’d been workshopping with on Litreactor was a medical doctor, I asked if he’d help me with some of the research for Shadow’s Talent because going through all the medical textbooks in my local library just didn’t tell me if I’d got it right. His name’s in the ‘Thanks to’ page for how he helped me destroy and rebuild my protagonist as accurately as I could.

If you’re already an author, this sort of thing is as familiar to you as making a cup of tea. If you’re one my readers interested in the ‘Where does he get this shit?’ side of things, then look no further, because I plan to create a new section on this blog dedicated to research materials that have helped. Whether you’re a writer or just someone interested in science, this page will be for you.

Many authors have done this before, and many can write their own articles about science in the kind of depth that I can’t. Good news then: I’ve already started approaching some of these people about guest blogging on here. You might just discover some new fiction books to read as well, if you tune in to this in the coming months.

The first thing I’m going to post later on will be my review of the book on top of the pile in my photo: Physics of the Future by Michio Kaku.