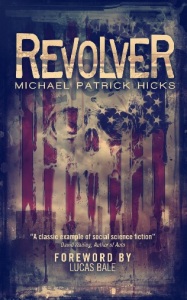 ‘Revolver’ is a short story, first published in No Way Home and also published by the author as a standalone, available for purchase or on Kindle Unlimited for subscribers. I obtained it with the latter method.

‘Revolver’ comes across as the kind of story that many authors could pour onto the page when either angry enough, drunk enough, or both. Not that I mean to suggest that Michael Patrick Hicks was necessarily either when he wrote the story, but the narrator of the story being constantly drunk and violently angry in many ways mirrors that desire a lot of authors get for a tirade expressed through their fiction. Yet for all its exaggeration, flamboyant levels of violence and a pervasive nastiness that oozes from most of its characters, ‘Revolver’ reads not like a tirade but more like controlled expression from an author who’s increasingly good at using extreme means of expression.

Are the views and opinions expressed by Cara Stone in Revolver all directly from the author’s own heart? I’m not going to make presumptions; indeed one of the best quotes I found in a literature textbook at university was to do with how it’s dangerous to build an interpretation on the idea that a character’s position is the writer’s (I wish I could remember who wrote that, and quote it verbatim.) Having read some of the author’s own social commentary through his website I can draw certain conclusions, but they’re largely irrelevant to what makes Revolver a cracking read.

What makes it so brilliant is that it stirs emotions in the reader that mirror the way emotions are stirred by the media within the story itself: a strong reaction and a response are what’s desired. The whole story carries a familiar irony that those who might benefit from considering its messages will most likely hate it, or perhaps more likely not read it at all after one look at the reviews (after writing this review, looking at the one star reviews will doubtless be a fun exercise!) and those who love it and simultaneously feel repelled by a lot of its content will spread the word to others likely to feel the same.

Anyone who gets too caught up in the politics of this story, or interprets it from a left or right perspective, is in my opinion missing the point. It’s more of an examination of human extremes than political ones – indeed there’s no debate about gun control or whether it’s possible in the USA, but there’s plenty about how guns make people behave and what people’s attitudes to them say. (Hard to enter into discussion without spoilers here.) There’s a futuristic setting but it’s a story that isn’t science fiction at all, it’s speculative, and speculates in a way that reads as hugely exaggerated to the point where it’s almost satire, yet there’s a sting of familiarity in the nastiness of the comments made by the supporting cast of this story – we’ve all seen this kind of thing on social media. If you haven’t yet, try something fun and google some quotes after you’ve read the story. I wouldn’t be surprised if at least one of them wasn’t a close match to something someone really said.

‘Revolver’ is perhaps about the dangers of such attitudes to women and sexuality and war ceasing to be minority views and spreading to become mainstream more than anything else – again, all about the human critique rather than the ‘propaganda’ some reviewers have supposedly labelled it. Personally, I’ve had a long standing dislike of reality television and enjoyed the extremes of this story about the lengths people will go to in front of audiences for money or attention, and those who will watch it and contribute. Is it only a matter of time before something like this happens? I want to say ‘unlikely’ but I suppose my real answer at the end of this story was a resounding ‘we’d better fucking hope not!’

Author head on for a moment then: ‘Revolver’ is the kind of story I’ve seen some writers in workshops tear apart for being too overt in its message, or for being the kind of author opinion voicing that readers are supposedly sick of, and some might even go as far as to suggest that no publisher would ever accept it. Trust me, I’ve met people online who I know would hate this story, but my own thoughts on it from an author point of view is that it takes some backbone to publish something like this and not have your morale dropped by foaming-mouth critics who consider it an attack on their own views. A male author writing as a female rape victim takes exceptional authorial bravery, and Hicks handles it with about as much tact as its possible to muster, and does so not for the shock value or for author experimentation, but for an essential depth of POV that contributes to the story’s messages.

‘Revolver’ is a brave, powerful piece of writing that says ‘Let’s not dress things up or put thin veils on the idea; let’s just shout about it and make it read like it’s a gun pointed in the reader’s face.’ It’s unapologetic, visceral, and the kind of story that would probably have sent the Clean Reader app into cyber meltdown. Give it a read if you like your stories to take you to the edge of your seat.

Oh yeah, and the standalone edition has an awesome cover!