Shadow’s Talent is a slightly longer than average fan letter. Apart from some email exchanges with indie authors, I’ve never written to a writer, let alone one of my heroes. But I have written a book. When one reader observed that my characters tend to drink a lot, I sipped my pint and said: ‘It’s because the novel’s basically a love letter to Iain Banks.’

My late hero passed on long before I ever had a final draft of it. I never managed to get to a signing with a copy of his latest novel either. Even if we’re both wrong in our lack of belief in an afterlife, I don’t intend to ask for his otherworldly signature for at least another fifty years.  But I hope for one thing: his fans just might notice another writer trying to fill the void he’s left.

This article is a blatant call to action. I freely admit it. If you’re a Banks fan, try me. Or you can drop me a line on this blog and share the admiration of one of the greatest writers Britain’s produced in the last sixty years.

Some writers give the advice ‘Write the book that you would want to read.’ Shadow’s Talent is a level above that: it’s the book I wish my hero could have written for me.

Here are four books he did write, and what they made me do. 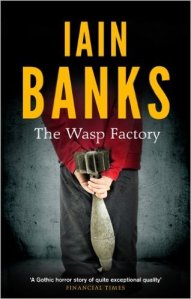 That ending. Just….holy shit. If you’ve seen the film Seven, or The Usual Suspects, and you want an ending that gobsmacking in a book, read this if you haven’t already. I fell in love with major plot twists when I read this book.

A narrator with a schizophrenic brother who burns dogs in phone boxes and frequently escapes from his committal. Who’s actually the more dangerous person? The more you read about Frank, the more you ask the question. The psychotic person who’s locked up often doesn’t look much worse than those whose freedom continues and never seems threatened.

Brian Carson in Shadow’s Talent isn’t so different from Eric in Wasp Factory in some ways. Is Shadow dangerous? Oh yeah, but he’s nothing like Frank.  Not for quite a while, anyway. Why not take that idea of a narrator who really doesn’t know himself half as well as he thinks and stretch it for a series rather than one book? The influence of Banks all the way.

The Steep Approach to Garbadale 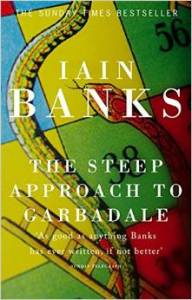 A book with lighter undertones, driven by illicit romances and the story of a young man called Alban becoming an actual man, and a forester. Did I become a ranger because this book inspired me to do it? Yeah, maybe that’s part of it.

Alban McGill has a persistent, nagging suspicion that his family are keeping something pretty important from him. They are. Half of them are gunning to smack him in the mouth while his uncle Blake (after who my money loving character Blake Stanford is named) showers him in money and says ‘Always look out for number one. Be selfish.’ Alban and Sophie formed some of the blueprint for Shadow and Ebony’s setup, years before I started writing seriously.

The critics were harsh on this book, but I’ve returned to it twice for its slower pace and it’s looser plotting. Tension does not mean action. This is one of those books that’s a great reminder of that. The major business deals that go down in it are far from boring boardrooms and clichéd execs as well. This is a ‘family’ book with great, memorable characters and lashings of Bank’s acerbic wit and unashamed political standoffishness. If he had something to say, he just said it.

Okay, here’s an admission, and you might have guessed this anyway by now: Bank’s sci-fi never really worked for me. It was all about the ‘black and white’ books (remember those covers? WHY did they ever change them?). All the way through them, I was left with the impossible question of why a guy who could write with such a brilliant awareness of tension and high stakes would write sci-fi where there was little that resembled a plot, info-dumps to put an encyclopaedia to shame and characters I just generally didn’t give a shit about. Why did he never write futuristic books with his ‘earth’ style?

Diversity, perhaps. One man with two completely different frames of writing mind. But when he published Transition, I was on my best fanboy behaviour: I went into Waterstones and bought it without looking at the price or even the blurb. When I got it home and started it, my heart leapt. Finally, here was the book where the combination happened. It wasn’t his best work, but it was up in the top half, and it left me with one resounding mission in life: to write like THIS!

Assassins are cool. Materialistic, money grabbing characters that we usually love to hate can be cool too, in a Wolf of Wall Street kind of way, and create that great idea that even in worlds of the future, technology and capability change but human nature essentially does not. Transition is partly about ambition, and how success can make your life wild. Shadow all the way.

Transition is the simultaneous alternative worlds idea on steroids, helped by one of those great things Banks often risked where other authors would not have: switches between 1st and 3rd person narratives, and several different people taking up the ‘I’ mantle. One of them is even anonymous and seems to have no connection to the main plot for most of the story. Another neat surprise ensues.

Shadow’s Talent is all first person, but as the series progresses, it will be impossible to tell this story without reverting to the bible of Banks and going 3rd person as well, from Book 3 onwards. Is it a risk? Yes. Did my hero do it? Yes. Does this make it okay? Well, does a crow shit in the pine tops?

The book that introduced me to debauchery on every level, long before ‘transgressive’ fiction came along. Complicity is a masterclass on how to use lurid detail and the dark, damaging side of human nature in a murder-mystery narrative. Bar culture flourishes in the book, along with Scorsese-esque levels of cursing and unashamed camera close ups of everything the reader shouldn’t feel comfortable seeing. Complicity is the book that taught me the writing equivalent of no-holds-barred fighting. This book screamed ‘Ignore the Legion of Deceny’ at me and I obeyed its Siren call.

Shadow’s Talent begins with bloody murder. It takes a step back from Complicity’s relentless violence, making those scenes more occasional, but bringing out the visceral close ups of the second half’s literally shattering climax.

Complicity also gave me the flashback style narrative. Most writing websites advise grounding stories in the present. It still sometimes baffles me why this advice is so accepted when I think about how the last third of Complicity jumps so effectively between the narrator’s boyhood and how it links to present events. Flashbacks rock if they’re done well. Perhaps that’s why I’ve come to love the memory-sharing scenes I began in Shadow’s Talent and developed as a staple of its upcoming sequel, Ghost of the Navigator.

Then there’s that ending. At least as good as Wasp Factory’s, but not as widely understood. Go on the Wikipedia page and there’ no mention of what the last few pages reveal. Or suggest. I’d love to take this apart at a book club, or maybe even on a Goodreads discussion.

Or with you. If you’ve read this book, who do you think was behind the crimes in it? I’d love a spoiler-ridden debate in my comments section. I really would.

Over to you. What’s your favourite Iain Banks book? They’re all pretty damn good to be fair, even the ones I didn’t like so much…