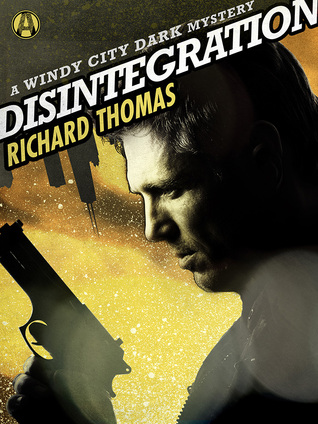 I’ve been reading Richard Thomas’s columns on Litreactor for years, and this is my first outing with anything fictional he’s written. One other member one described RIchard Thomas as ‘a freakin’ cool guy’ in an email to me. I don’t know Richard myself; I’ve only traded a forum post with him, to ask him when this book would be out and if I could get a Nook edition, but I can tell you one thing: he’s written a freakin’ cool book.

Read Disintegration if you dare: it’s up there with the most bloodthirsty reads I’ve had and it will not inspire you to be happy. It will, however, remind that that even at the worst of times your life is probably fine. It’s also my second five star review of the year.

A review of Disintegration by Richard Thomas

Disintegration is one of those rare books that after twenty pages I decided I really didn’t like, only to go back for a second go and end up reading the rest in two sittings.

Was my return to it a case of ‘I don’t like it but I admire it?’ Possibly. Thomas’s writing style is enviable to say the least: every paragraph feels polished, the ‘camera’ is always so concisely focused on what should inflict maximum impact on the reader, and the economy is striking: fast paced action and montage from scene to scene while giving plenty of time for reflection.

Was it a case of wanting to find redeeming features in a character/narrator who on the face of it doesn’t appear to have any? Definitely. Did I find what I was looking for? Yes. In bucket loads. The narrator’s voice for me has a recognisable, laconic Sin City style monotone drawl, but the way he sometimes seems as high on the description of his world as he does on pills and booze adds another level altogether. While we’re on movies, any creative arts student could have a field day comparing Disintegration to Taxi Driver, and my focus in such a study would be how Thomas’s narrator is a far more sympathetic character than Travis Bickle in a world where it’s damn hard to inspire anything resembling sympathy. My decision to award a five star review basically came down to this: the way it was done was new to me. Impossible to completely explain without spoilers (if you’ve read the book, come and join in with the monthly book club at Litreactor where Disintegration is August’s choice and I’ll try and talk about this there). Yes, there’s a helping of kick-the-dog tropes in reverse, but the redemption of this character goes beyond that. It goes beyond that all too familiar ‘the people he kills are worse’ idea as well. It does take a leap of faith to believe that this man was once any kind of ordinary citizen and was once incapable of doing what he does now, and part of me wondered if his old life were really the way he imagined it, but therein lies the brilliance…

Disintegration’s cover labels it ‘A Windy City Mystery,’ but for a while there didn’t appear to be much that was mysterious about it. I came to consider it an unconventional mystery in that the narrator often shows very little urge to solve anything, or even see there’s anything odd at work other than something feeling ‘wrong’ about his life. A lot of the page turning quality of Thomas’s writing was in the high intensity action, and the horror film shtick of rooting for the killer because sometimes the victims have it coming, not in the mystery, or in the ‘I have to know the truth even if I read all night to get it’ element I recently gave Hugh Howey five stars for. Disintegration is a new kind of mystery fiction for me.

Even when revelations do happen, the real mystery for me in Disintegration lies in the questions that remain largely unanswered or open to interpretation. What I never found out left me thinking back through the book, not perhaps to the extend where I’d do a re-read looking for clues, but the kind that made me re-consider me love of complete closure in fiction. Any writer who can do that’s earned their five stars.

Disintegration also has a brilliant ending. Happy or sad, I’m not going to say. Just that if this book’s your sort of thing and it leaves you disappointed, I’ll be surprised.