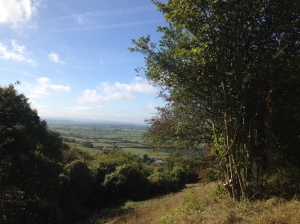 (view from a site in southern England, coppicing of hazel tree on the right in progress)

The nights may be drawing in but this is my favourite time of year in my day job as a ranger – October marks the start of the scrub clearing season, when we’re allowed and indeed encouraged to cut encroaching bramble bushes and vines back on a large scale. The same rules apply to trees: felling, logging, pruning, coppicing, thinning out….all in a day’s work between now and March. Scrub clearing to me is like mainlining dopamine. I love it. Almost as much as writing.

These last three weeks, some chainsaws have been brought out to play and I remembered an analogy I stuck up on Facebook last year about why writing sometimes isn’t so different from tree felling: get the thing down, take the weight out of it and tidy up, then turn it into something neat and saleable and take pride in how good you can make it look to others. Don’t worry about getting ‘hung up’ – there’s always a way to deal with it and someone can always give you advice. Especially if they’re more experienced, and someone always is. In Shadow’s Talent, Ebony has a line of dialogue about how she’s just got a chainsaw pinched in a fallen oak tree that’s ‘a real bugger to shift.’ Happens to the best of us.

Last week I thought of something to add to that while out on one site that had two good view points from the top of a woodland hill. The trees had grown over them so much that a good deal of the view was obscured. Stephen King has a good analogy in ‘On Writing’ about stepping back from trees and looking at the forest, so here’s a variation: if you cut some trees back, sometimes you’ll see a much bigger and more diverse landscape than just looking at a forest all the time.

I guess I put the work I’d done that day and writing together because the landscape of Ghost of the Navigator, my sequel to Shadow’s Talent is getting increasingly vast and more difficult to take in all at once. It might all seem a little vague here because I don’t want to give spoilers, but I think every writer’s had that feeling where a story can become overwhelming and packed with too much stuff. The forest where the trees are so packed together that whenever you try taking one out, it just hangs up. You solve one problem but create another. That’s the benefit and curse of creating your own landscape as a writer: unlike a real scenic view, once those trees are clear you can move anything you choose around. Change the landscapes features, wipe them out, try a different set of lenses to view them through, and plenty more clever analogies you could name. The trouble is, sometimes it’s hard to know what goes where and what spoils the view instead of enhancing it.

Re-arranging the landscape is really what draft two’s for. What I do when I’m stuck on draft one isn’t so different from cutting back those trees to see the view. If I get as stuck and crowded out by my own ideas as I have been lately with Ghost of the Navigator, what I do is set out everything in front of me and take a look. Sometimes I do this in my head, sometimes I write notes down on paper (usually by hand – computers are quicker but sometimes forcing a slow down helps a lot.)

This is the same process I used for Shadow’s Talent, particularly when the complex backstory behind several characters’ families started creating past events in my head that it was difficult to tie up coherently. Most stories I can think of have some element of cause and effect, and with Shadow this is on a big scale: a lot of what has happened in people’s pasts is driving the current events. Why the various crimes in the were/are committed sometimes have reasons going back two or three generations. In Ghost of the Navigator, I’m finding myself going back even further into the history of why Earth and Carnathia are worlds only certain people can travel between, and why certain families have reason to distrust each other. Not to mention I have to think about how this landscape is going to look in the future, because of one character who just like the narrator in Rush’s Clockwork Angles ‘can’t stop thinking big.’ I do as a writer what Shadow does as someone driven to change his circumstances: I make things complicated and I sometimes get things horribly wrong.

Science fiction has a large amount of its appeal to writers because they can create a universe-wide landscape and then fill it with characters who have big personal landscapes of their own. Keeping both them clear enough to view, not to mention making them appeal to someone else, is a great big challenge. Shadow’s Talent is a longer than average book with several complex and wide-branching storylines built around one character, whose viewpoint is the only one the reader gets through the first person narrative. Making it what’s on offer in the various ebook stores now was largely down to me doing the writer’s equivalent of picking up a range of power tools and de-cluttering the view.

Ghost of the Navigator will be the same, but probably take a lot more lumberjacking before it’s ready. My ambition is clear though: when I take people to that viewpoint and show them the finished thing, I want them to be blown away. Just like a visitor to any site I’ve worked on.